This Easter eight of us booked a trip with Ur Nomad to Morocco. Txus Ruiz de Erentxun (Ur Nomad) has been running kayaking trips to Morocco for twenty years. He and his team ran an excellent trip for us. All the guidebooks we found for Morocco were in Spanish so it was useful that we had a Spanish guide.

River levels were perfect while we were there. The Moroccan snow melt season is short, we were lucky that they had had a lot of snow this winter and it had snowed two weeks before we arrived. By the end of March the weather had warmed up quite a bit so it was ideal of an Easter kayaking trip.

We rented kayaks from our guide. Only one of our group flew her boat over but she had no issues flying it with Ryanair. If all eight of us had flown our boats over that could have caused issues. We flew into Marrakesh and spent the night there getting lost in the maze of markets. Having some French would have helped to find our way about. The next day drove for six hours to Cathedrale.

This was a great grade 3 river to warm up on. Lots of waves, friendly holes, playspots and some fun read and run rapids.

We started at the famous Cathedral, an amazing rock formation towering over the Ahensal River. We stopped for the night at a beach somewhere near Tilougguite for our first night outside. There was a full moon and we slept by the campfire listening to the river running by us. There isn’t a better way to sleep.

The second day the river picked up a little and there were some interesting rapids to keep us on our toes. We paddled to Bin El-Ouidane. Unfortunately out shuttle vans were waiting for us at the other side of the reservoir. Fortunately Txus had organised a boat to pick us up and drive us to the other side!

This river starts high in the Midelt Province. Access to get to this river can be very difficult, the road is often washed away by meltwater floods or blocked by landslides or rock falls and so it has not been paddled very often. We were lucky the road was open and we could drive all the way to the small town of Oulgati at an elevation of just under 2,000 metres.

The river is in a deep and narrow canyon with beautiful rock formations on either bank. The Melloul start of as a step creek style river. It has some great technical drops and tricky rapids with a few portages also. As you paddle down the character of the river changes. It flattens out and the volume increases as more tributaries join it and the rapids become more boulder garden style rapids.

We spend the night before we got on the river in a gite d’etape in Imilchil. We slept by the river the first night near the tiny village of Batli and stayed in Anergi the second night in a very comfortable gite d’etape, finishing back in Cathedrale where the Melloul and the Ahensal merge.

This section of the Ahansal was one of my favourite sections of river. It ran through two gorges with the most spectacular scenery and great rapids. It is a narrow steep creek style river with drops, holes and interesting rapids in the first gorge. The river flattens out after the first gorge. The second gorge is a beautiful narrow gorge with big boils and amazing scenery. We loved it so much we did it twice.

Ur Nomade had everything organised for us so logistics were easy. However most of the roads to the rivers need four wheel drive and it take time to get everywhere as the roads are in a poor condition. We flew to Marrakesh and drove for six hours to get to Catherdrale.

The locals fed us tagine, cous cous, kababs and fresh bread. While on the river we stopped off in tea houses along the way. Each house gave us delicious sweet Morocco tea and nuts and welcomed us into their houses. 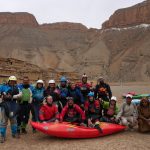 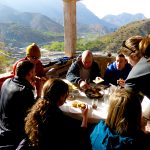 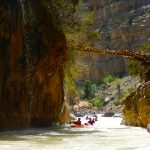 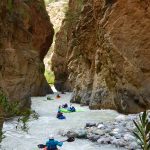 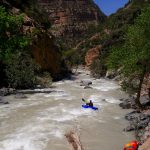 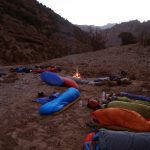 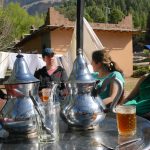 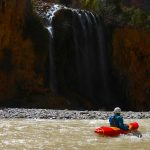 Txus had everything organised. We camped by the river when we could and stayed in gite d’etapes with the locals when in the villages.

It’s not often you get to go on a paddling trip with seven of your friends, and Morocco was a great place to travel and paddle with such a large group. The rivers, food, scenery and people couldn’t have been better. Thanks to Txus, and everyone in Ur Nomade. Thanks also to Fernando Ayuso and Ramone Etxaniz for the photos.

Ireland. Laura is active encouraging and developing women’s paddling in Ireland, putting her energy into clinics and coaching weekends. When not working as a teacher, her paddling schedule takes her all over Europe. More often however, you’ll find her chasing the rain around Wicklow on Ireland’s east coast. Whether whitewater, freestyle, surfing or racing K1 in the Liffey descent, Laura’s infectious enthusiasm shines through.
← Previous

Why you need a good spraydeck