Here are a few tips on planning a trip to the Zambezi – we found it difficult to find information on kayaking there independently – so here’s what I discovered last August. 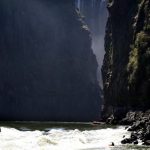 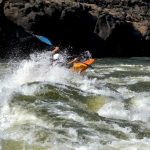 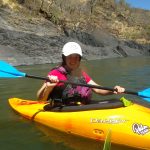 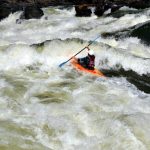 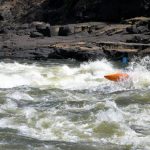 It’s a long trip from Ireland but well worth every minute. We booked our flights in February and travelled with South African Airlines who allow two bags on board, with a weight limit on each bag at 23 kg. This meant we could all travel with our boats for no extra cost. We flew Dublin – Heathrow, London- Johannesburg SA – Livingston, Zambia. Our flight to Livingston flew right over the Batoka Gorge and so we got out first view of the Zambezi from the air.

We stayed in Jollyboys Backpackers Hostel. It is located in the centre of Livingstone and is very comfortable. The staff were very helpful in assisting us with organising shuttles. A bonus with this hostel was that if you stay for seven nights you get the next night free so that brought our costs down a bit. We stayed in a dorm room.

What boat to bring?

You’ll hear a variety of opinions and ideas on this topic. It really depends on the time of year you go. We went in mid-August through mid-September. The river is still quite high at this time of year so there are fewer play holes or waves working at this time. So a faster boat is more suitable as you can catch the waves that are there and you can paddle away from the gigantic holes!

I paddled the Axiom 8.0 and it was the perfect boat for that time of year. The lads in the group who brought smaller playboats were jealous as I could catch the wave at rapid #2 (one of the best waves on the river) days before they could as my boat was faster. The Axiom surfs great and is super fast. If I was to go back again I would choose it again. I rarely got backlooped in comparison to the others in short playboats who at times paddled entire rapids on their stern!

The river is big, full of waves, boils whirlpools and massive holes. The top section of the river only opened in early August and so the river was still very high when we arrived. The river drops around thirty centimetres every day so after three weeks we could see a huge difference in the water level. Rapids that are easier in high water can get trickier in lower water, #15 for example, the hole becomes huge. The rapids in the top section seemed to get a little easier the longer we were there, as the lines became clearer.

The rapids are numbered 1–25. My favourite rapids were#5 and #10. Sometimes I would nail it getting air on the waves of #5 and paddle the whole rapid with a dry head, the next time I wouldn’t be so lucky – it’s always an interesting rapid. I liked #10 because it’s just big and bouncy and fun.

Getting to the river

We had no plan before we got there as to how we would get to the river each day but we sorted it out once we arrived. For the first week, we went with Zambezi Rafting. It worked out expensive enough with a charge of $40 per person for a shuttle to and from the river with lunch included. However, if there was a raft going we were given a deal and we then helped with rescues.

Starting from rapid #1 means that you start in the national park, this adds an extra $10 onto the price as there is a charge for entering the park.

We also hired a guide for the first day to show us the lines. He gave us some useful tips, such as how to avoid the whirlpools on the bottom of #6. I, unfortunately, didn’t give them enough space and experienced the whirlpool, something I’d prefer not to do again!

When we got more familiar with how things were done we started to organise our own shuttles. We would ask a taxi driver outside the hostel if he knew someone with a pick-up truck that could take us to the river. After a few calls and some waiting around pickup truck would arrive. Then the haggling would start and finally, we would agree on a price and set off for the river. We would collect porters a village on the way to carry our boats into the gorge. These trips were always great fun. The truck wouldn’t start, the drivers would be late or buffalo would block our path to the truck.

The river is pushy and paddling #1–#25 is a long day out, along with hiking in and out of the gorge day after day. Being fit and strong will make the whole trip a lot more enjoyable.

Be confident in your roll

Some days I had to roll over ten times other days I didn’t roll at all. Paddling on the Zambezi without a good roll would not be nice; swimming would be inevitable and lots of it. So make sure you are confident and ready for big waves.

Bring shoes with a good sole; walking down into the gorge can be slippery and there are some sketchy scree slopes and ladders at some access points. Also, a long sleeve thermal is good for the river. Something to keep the sun off. The rocks can be baking hot and shade hard to find and it can also be chilly in the gorge when the wind is blowing so this top will keep you warm.

The local kayakers have no way of getting gear as there are no kayaking shops around. There will be lots of opportunities to sell or donate your gear to them so when choosing what gear to bring keep that in mind. 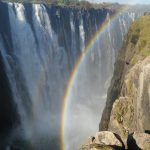 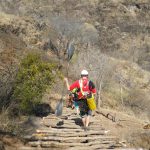 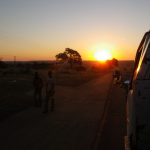 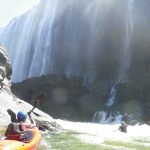 Make the effort of walking upstream over the rocks to paddle under the falls. It’s amazing there! Watching the sunset while standing above rapid #7 is pretty amazing too.

Ireland. Laura is active encouraging and developing women’s paddling in Ireland, putting her energy into clinics and coaching weekends. When not working as a teacher, her paddling schedule takes her all over Europe. More often however, you’ll find her chasing the rain around Wicklow on Ireland’s east coast. Whether whitewater, freestyle, surfing or racing K1 in the Liffey descent, Laura’s infectious enthusiasm shines through.
← Previous

Every whitewater kayaker should ...

Toni's travels – flying with your kayak